I’ve been meaning to post this for the last several days, but kept forgetting.  In any case, better late than never.  Here’s my Christmas picture and letter for 2012. 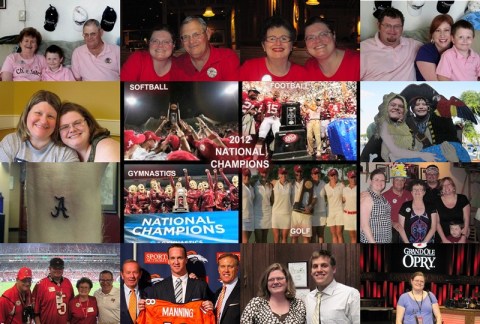 I know after last year you all have been counting the days until you received my next Christmas newsletter, and I completely understand why, so let’s go ahead and get the “elephant” in the room out of the way.  I ended my last letter reminding you all to tune in on January 9th to see Alabama play for its 14th football National Championship.  Little did I know we’d need to stay glued to our televisions into June.  Following the 21-0 win over LSU in the BCS National Championship game in New Orleans, LA, the Alabama women’s gymnastics team brought home a national championship in April from Duluth, GA winning back to back championships in the sport for the first time in school history.  Not to be outdone, the women’s golf team brought home their first national championship in May from Franklin, TN.  And finally, the softball team that had been knock, knock, knocking on the door of the Women’s College World Series championship for years won their first national championship in June on a rain-soaked diamond in Oklahoma City, OK.  Quite a way for our women’s teams to celebrate the 40th anniversary of Title IX. We very nearly had a fifth team championship to report, but the men’s golf team came in second to Texas in the national championship literally by one stroke on the 18th hole.  So, by the time summer rolled around, my beloved Crimson Tide had experienced one of the most successful years in college sports history, and I couldn’t have been prouder of how each of them represented our school. It was practically surreal and still is even now as the football team is preparing to take on the Irish of Notre Dame in the BCS national championship game on January 7th in Miami, FL.  I know at some point this ridiculous ride will come to an end, so I’m savoring every ounce of it while it’s spinning.

Now, let’s see what else happened this year. In March, the South Florida women’s basketball team was invited to play in the WNIT.  They played a game against James Madison University here in Virginia, so I drove out to see them.  Despite losing the game, the girls fought hard, and it was great to get to see my brother. In April, I traveled to Atlanta, GA to visit my college roommate, Stefanie and her family.  It was a nice vacation, but not nearly long enough.  We ate and shopped and watched movies and got tattoos.  Yes, you read that right.  We both wanted new tattoos, so we decided to go to the shop (Inksomnia in Alpharetta, GA. Ask for Jeff.) together during my visit.  I had promised myself I’d get an Alabama tattoo if we won our 13th national championship in 2009.  I was definitely overdue on keeping my promise, but nevertheless, I kept it.  Interestingly enough, we got our tattoos on April 13th…4/13…FOR #13.  That was completely unplanned, but in hindsight it seems like it was meant to be.  Stefanie got an equally appropriate tattoo for her that read “Flawed but Fabulous.”  In October, Stefanie and her family came up to visit her husband’s family for an all too short weekend, but we got to spend an afternoon together window shopping at the mall and talking each other’s ears off.

In July, mom and dad came for a visit over the week of July 4th, so I took some time off from work to spend with them.  I even took them to their first Washington Nationals baseball game while they were here.  In late July, my annual conference for work took me to Nashville, TN.  I had been there before, but only briefly, so this was my first time to really see the sights of Nashville like the Country Music Hall of Fame, the Ryman Auditorium, and the Grand Ole Opry.  The Ryman even had this eeriness to it like you could feel the ghosts of past performers in the building; however, the eeriest part of any tour I took was the line that was nailed to the wall in the backstage lounge of the Opry showing where the flood waters had reached in May 2010.  The building is on a hill, and that line was easily up to my waist.

In August, the NFL, as it is wont to do, began a new season, but this time, my precious Peyton Manning no longer had a horseshoe on his helmet, but rather a horse’s head.  The Colts released him in March and a week later John Elway signed him as a Denver Bronco. It has been a relief seeing him play in a way that suggests he hasn’t lost a step during his time off recovering from four neck surgeries. As hard as it has been to embrace the color orange, I have enjoyed becoming a Bronco fan this season and hopefully for many seasons to come.  Also in August, at a Bucs preseason game, mom, dad, and Andy were randomly invited at the concession stand by the Bucs Executive VP Bryan Glazer to sit in the owner’s box for the game.  They were treated like royalty with great seats, food, and gifts.  It may very well have been one of the greatest days of my father’s life. The smile on his face in the pictures is priceless. It was an incredible honor for him considering the loyalty and dedication he has given that organization.  He can still count on one hand how many home games (all preseason) he has missed in 37 seasons.  Over Thanksgiving, I got to attend the Bucs/Falcons game with them, but even though I kept my eyes peeled for Bryan Glazer to walk by, we, unfortunately, had to sit in the regular seats.  However, I did get to see former Colt Dallas Clark and former Alabama greats Julio Jones and Mark Barron play.

In September, we celebrated Lincoln’s 5th birthday, and quite slyly, mom pulled off a surprise 70th birthday celebration for dad complete with my Uncle John and Aunt Gussie, friends, Rotarians, and former colleagues attending.  It was a joy to see so many people who love my father wanting to celebrate his life so far.  He is well loved, deservedly so.  While I was home, I attended his weekly Rotary meeting with him at which he presented Andy and me with Paul Harris Fellows (named for the founder of Rotary International) to honor us for all the work we’ve done with him over the years to help the Rotarians in their community service.  It was a truly unexpected honor to receive it from my father who taught me the importance of giving back.

Other happenings this year included Andy resigning from the South Florida women’s basketball team to return to the classroom full time at Benito Middle School teaching reading.  Janet received the Teacher Incentive Fund Award in recognition of the improvement her students have made because of her teaching.  Lincoln, having missed the birthdate cut off for kindergarten by five days and his preschool having to close its doors due to funding, started the Voluntary Pre-Kindergarten program at Family of Christ Christian School. He is smart as a whip, knows his alphabet and his numbers (much to the pride of his accountant Aunt), is easy to smile and laugh, and will talk your ear off about dinosaurs (complete with scientific names and facts).  I’m not ashamed to admit the kid’s probably smarter than most of us.  Mimi and Pa continue to be very good at retirement and at being two of the best grandparents a kid could have, in my humble opinion.

I hope all of you have enjoyed 2012 in countless ways, and are looking forward to a prosperous 2013.