Happy Trails to You, Mr. Jobs

When I was in elementary school, I played two computer games constantly: Lemonade Stand and Oregon Trail.  I couldn’t get enough of them, and I played them on one of these:

My parents were both educators: my mother a teacher, my father a principal.  Most days I’d have to stay later at school after the final bell because teachers don’t leave at the same time students do…or at least my parents didn’t.  So, I would sit in my mom’s classroom and play those computer games on a Macintosh computer until she was ready to go home.

Steve Jobs had the intelligence to create these personal computers and one of his target markets at the beginning was the classroom.  My father had the foresight to follow Steve Jobs early on and put Macintosh computers in every classroom in our school.  Since then, my father has only owned one computer that wasn’t an Apple product…and eventually I ended up with that IBM laptop.  In fact, I think I was the first person in my family to own a computer that was not an Apple product.

The phrase “think outside the box” is wholly overused, but allow me to use it here to describe Steve Jobs. Steve Jobs didn’t just think outside the box.  He WAS the outside of the box, and quite frankly he was out there all alone because no one could come close to his visionary audacity.  He was incredibly down to earth yet a little whackadoo, but that genuineness is what we loved about him. He changed the world in one of the most simple, yet important ways possible: he changed the way we communicate with each other. Communication is our world’s greatest asset, and Steve Jobs used his brilliance to harness its direction.

Today, Steve Jobs died at age 56.  He left behind a wife, four children, millions of dedicated customers, and some of the greatest inventions this world has ever seen.

Rest in Peace, Mr. Jobs.  Maybe some day we’ll meet somewhere along the Oregon Trail and catch up over some lemonade. 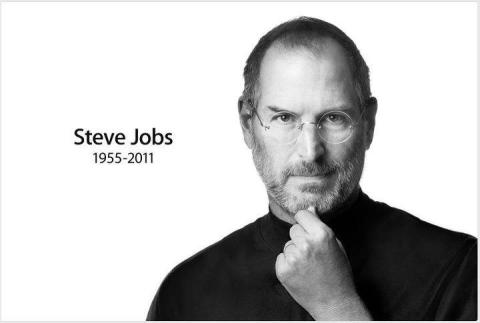