My nephew is without a doubt the coolest kid ever!

I’m babysitting right now.  Janet is at work and Andy has gone to the grocery store to stock up on Lincoln supplies.  Lincoln has had his dinner and is now in his jumper in front of the TV watching Paula Deen cook.  He’s jumping up and down like no tomorrow.  It’s amazing he doesn’t have bruised feet from stomping on the hardwood.  I’d take a picture and show you, but I don’t think he’ll stop jumping long enough to get a good one.  I mean he jumped up and down hard enough to make one of his socks fall off.

One thing’s for sure though: this little boy is crazy about Paula Deen.

It runs in the family.

More later on my stress free week of snuggles, cuddles, and kisses with Lincoln.

Congratulations to the Indianapolis Colts and the city of Indianapolis on being named the host of Super Bowl XLVI on February 5, 2012. Now let’s just hope with the owner’s opting out of the CBA thus creating possible future cap-free seasons and/or lock-outs that there actually is a Super Bowl to be had in Indianapolis. It will be the first Super Bowl hosted in the state of Indiana as they beat out Houston and Arizona for the bid. This is the majority of the reason why Lucas Oil Stadium was built, so kudos to Jim Irsay for fighting to the finish until the goal of hosting a Super Bowl was achieved.

Because Lincoln is so darned cute:

It should be noted that reason #1 is because Aunt Leann loves Lincoln, and reasons #2-#5,284 are because Lincoln is so darned cute.

The television network upfronts were this week. Upfronts are when the networks unveil their fall and midseason replacement lineups. I am most upset about Moonlight being cancelled. I’m trying to hold out hope that some network out there (even if it’s FX or USA) will pick it up and keep it going. I mean people organized Red Cross Blood Drives to save the freaking show for crying out loud. In any case, below is the grid I make every year when the upfront come out. View the pdf version of it here. 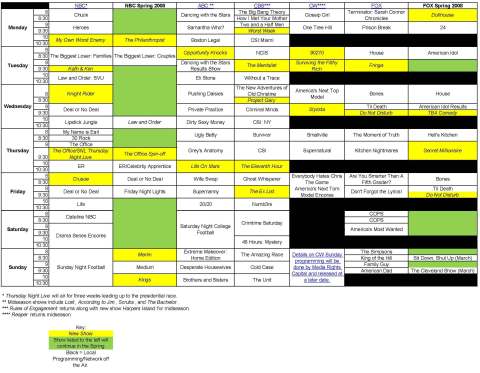 To read about each network’s lineup, please use the following links:

If you’d like an original painting by Lincoln, it might cost you a pretty penny. As you can see, the kid obviously has a gift. 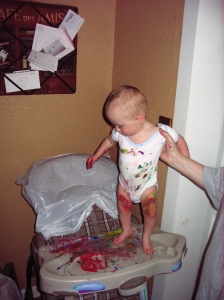 I just love this little schedule that comes out in the spring to remind us that fall is just around the corner.  And, with fall comes football.  Bring it on.  It can’t come soon enough!  I’ve had my fill of the NBA and NHL playoffs and they’re not even over, yet.

The Alabama schedule looks like one of the harder ones we’ve played in a while, so I’m looking forward to seeing how the boys react to the challenge.

This morning ESPN reporter Sal Paolantonio appeared on ESPN2’s morning radio/TV show Mike and Mike in the Morning to provide an update on the Marvin Harrison story.  At the end of his interview, he said that he didn’t understand why someone like Marvin Harrison who had grown up in North Philly but gotten out and made something of himself would bother going back to his old neighborhood and purchasing these two businesses.  And that after purchasing them, he didn’t understand why Marvin would be so closely involved in those businesses.  Sal says he doesn’t understand it because he and Marvin both know that North Philly isn’t the safest place in the world.  (In fact, just last week there were 10 people shot and killed in North Philly, and that does not include people who may have been shot but survived.)

This criticism annoyed me because Sal was basically criticizing Marvin for living and conducting business where he wanted to.  I wonder if he ever considered the idea that Marvin purchased those two businesses to bring commerce to a part of Philadelphia that needs cleaning up in addition to creating legal jobs for people.  Maybe he is involved in the day to day operations of these businesses a little more than most people would expect him to be, but maybe that’s also been his safeguard to make sure that everything is run on the up and up.  If he’s doing the pat-downs at the door of Playmakers and confiscating people’s weapons, he’s doing it to protect the people and keep them all safe.

Of course we’ve seen what can happen when celebrities and sports figures feel obligated to help the people they grew up with in a not so nice neighborhood (see: Michael Vick), but I have to believe based on the way Marvin has carried himself that he’s smart enough to know when to draw the line.  So, I take issue with Sal being appalled that Marvin would go back to his childhood neighborhood to live and help its economy.

At this point, we know that a gun registered in Marvin’s name was used in the shooting, but still they don’t have a credible witness that has identified Marvin as the shooter.  And for that matter, I’m really not interested in someone saying they are willing to testify that Marvin was the shooter.  That says to me that they’re just willing to say those words not that they know them to be true.

I’ve been thinking a lot since the story broke about Ms. Linda, Marvin’s mother, and how she’s feeling about all this.  I met her last summer and she was just such a kind and personable woman.  She did everything she could to raise her children to be good people, and I just hate to see that the press is trying to destroy everything she did to raise Marvin and his sister the right way.

There’re are a lot of holes in this case, and I’m just hopeful that this is all over soon.  Every part of me believes that he did not do this, so PLEASE PLEASE PLEASE prove me right.

The Colts 3-day rookie mini-camp took place this past weekend as I’m sure it did in 31 other NFL cities. It’s the first time that any of the drafted players and rookie free agents get to meet together with team officials and some of the veteran players even though veteran players aren’t required to be there. This was a scene from Friday:

The hand stuck out. Suddenly, to Mike Hart, the NFL was no longer a distant dream.The hand belonged to Colts quarterback Peyton Manning.

“I was like, ‘I know who you are,’’’ Hart said, recalling the story with a smile.

The Quiet Ones [UPDATED]

It’s always the quiet ones isn’t it.  Yes, this is the last thing that most people expected to ever hear about Marvin Harrison, even though I’ve always felt his childhood in Philadelphia would probably come back to haunt him.  The Philly police have interviewed him not as a suspect but as a person who was present at the incident that occurred, and ballistics tests are showing that the shots that were fired came from a registered gun he owns.  It all looks very bad on the surface, and I’m shocked and disappointed to say the least, but I am reserving judgment until all the facts are known.

I will say, if he did it, then he needs to pay the price all around from the justice system to the NFL. If he didn’t do it, then I think he deserves our benefit of the doubt.